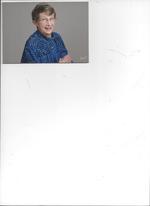 Eleanor Peg McDaniel was a woman of many talents. Although none of them were hidden, they had a common theme: Peg loved to serve others.
One of the most important acts of service for Peg was caring for her family. She was born in Sheridan, Wyoming to H.R. and Adassa McDaniel. Her family had several moves before finally settling in Moscow, Idaho. As the youngest of 9 kids, Peg was proud of the fact that she kept up with Ted, June, Kenny, Carl, Bob, Dolly, Betty, and Helen, then later her nieces and nephews and then grands and great-grand’s. Peg’s education was obtained at the University of Idaho in Moscow before she served as a caregiver to her ailing parents. Peg loved her family reunions and would plan skits and activities for the enjoyment of all and Christmas would find her filling as much of the family’s needs as possible.
Peg began her employment with the Forest Service after college. She worked on the St. Joe National Forest, the Lolo National Forest and eventually ended up in Missoula at the regional office. Peg retired as a budget analyst after approximately 30 years of service. After leaving, Peg loved the get-togethers with her retired Forest Service friends.
The church family at First Presbyterian Church was an important part of Peg’s life for over 50 years. She generously served others by singing in the church choir, supervising the church kitchen and preparing delicious meals for many, lending a hand in numerous mission projects, managing parts of the rummage sales, and servicing many lawn mowers. She taught Sunday school, plus participated in WOW Bible Study and in Bible Study Fellowship where she served as children’s leader.
Peg served singing in Sweet Adelines for 45 years. During that time Peg held every office in the chorus- except choreographer and costumes. She was the chairman of the very successful Nacho booth fundraiser at the fair for many years. Peg and her little red trailer carted risers and supplies for many of the Adelines activities. She loved singing and making people laugh. She enjoyed participating in comedy quartets singing lead. She really cut a rug singing her “muscle suit”, and as a pirate. Peg was on the risers with Five Valley Chorus while they won many Regional Competition medals, eight of them gold. This awarded the chorus opportunities to compete in cities like Calgary, San Antonio, and Fort Lauderdale.
Peg served the neighborhood in many ways. Peg could fix lawn mowers and she was good at it. Using her farm experience Peg gave advice on many neighbor’s projects. Peg also loved animals and would do anything to make sure that the neighborhood animals were properly cared for. Peg herself shared love with animals that found their way to her home. She loved her dogs, cats, horses, and a favorite pet was her chicken Mitsy.
Peg served as a catalyst, connecting old friends to new friends. Peg loved to serve her friends homemade chicken dinners, pot roast, or pie, depending on what was on sale at Orange Street Food Farm.
Peg also served herself a big slice of life. Life loved Peg and she took it all in. During her time with the Forest Service, Peg purchased land in Superior. She then purchased a cabin 17 miles from her property. She took the cabin apart, labeled each log, moved it piece by piece and using 10-inch spikes she reassembled it herself. Peg also did her own plumbing. She loved that place. Peg even loved the out-house with its fur-covered toilet seats! Most of all Peg appreciated having people there to enjoy all the she had done.
Even in the end Peg served. Her caregivers and friends enjoyed being with her knowing they were making it possible for her to stay in her home. She thanked everyone as often as possible. The Salty Six, consisting of Shady Denson, Candy Johnson, Melanie Graham, Kathy and Richard Newman, with Peg as their captain, were grateful to have been able to serve her. In her final days Peg stated that she was very proud of all that she accomplished.
Peg, thank you for your life of service. You are loved and will not be forgotten.
Memorials can be made to Sweet Adelines (c/o Candy Johnson, 5643 Prospect Dr., Missoula 59808) and the Humane Society of Missoula. Sunset Memorial Funeral Home provided cremation. A celebration of her life of service will be held on a date yet to be determined.