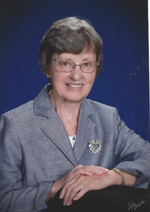 She was born on June 29, 1934 in Las Vegas, NV to Forrest and Anita Weathers. She graduated from Emmett High School in Emmett, Idaho and then married Donald Thrall. After traveling for Don’s Navy career, they made their home in Missoula with their four children. They later divorced. In 1976, she married Russell Jacobson.

Her love of gardening was evident in her beautiful yard that grew flowers for every season.

She was preceded in death by her parents and siblings, Keith, Norman and Douglass, Sybil, Barbara and Beverly. Also preceding her were her son Robert Keith, husband Russ and first husband Donald Thrall.

A family graveside service will be held. We hope to have a traditional service at a later time when we can celebrate Betty’s life with friends and family.

In lieu of flowers, the family asks that you consider a donation to Immanuel Lutheran Church in Missoula or Hospice of Missoula.

Condolences can be shared at SunsetFuneralHomeCemetery.com.