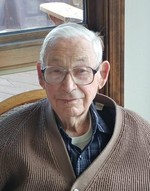 Larry, known as Bud to all his family and childhood friends, was born on March 6, 1925 in Almo, Idaho, to Jake and Ida Bruesch as the youngest of six children. He was educated at the Almo School and Raft River High School. Bud played trumpet and was a member of a dance band that traveled the southern Idaho area playing big band swing music for dances. He attended Utah State Agricultural College, earning a BS in physics, followed by a degree in civil engineering from the University of Idaho. He joined the Air Force and served in WWII and Korea.

Bud married Thirza Hull on August 20, 1950 in Twin Falls, Idaho. Thirza worked stateside while Bud was in Korea and upon his return, he began working for the Forest Service. During his career, Bud was posted in Alaska, Montana and Virginia. His last posting was in Missoula, where he worked until retirement. Bud and Thirza had three daughters, Julia, Karen and Laura.

A life long fly fisherman, Bud spent many happy hours on rivers in Montana and Idaho, and tied his own flies. Upon retirement, Bud satisfied an early interest in rock hounding by becoming proficient in hunting, cutting, and polishing rocks, and created jewelry and belt buckles for others. Annual winter long trips to Quartzsite, AZ provided the perfect opportunity to indulge this hobby.

Bud was preceded in death by his wife Thirza, his parents and brother and sisters. Survivors include Julia Olsen, Karen (Chris Farnsworth) Bruesch and Laura (John) Hunton Other survivors are Bud's grandchildren Hans Bruesch-Olsen, Colin (Mariel) Bruesch-Olsen, Kyle (Ana) Tkacik, Katie Hunton, Annalee Hunton, and Jacob Hunton, along with three great-grandsons, Jameson, Harrison and Levon. Bud will be remembered by other family members throughout the west.

The family will have a private memorial in Almo at a later date.