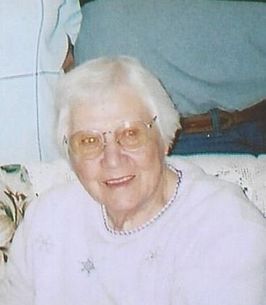 Share this tribute
Memorial Candles Lit for Lydia | SEE ALL
Light a Candle
"We are honored to provide this Book of Memories to the family."
— Sunset Cemetery Funeral Home and Crematory
Funeral Details Memory Wall Photos & Videos Send Flowers

Print
— Lydia passed naturally into the loving arms of her husband, Tom; son, Allen and granddaughter Donnette, on Nov. 16, 2018.

Lydia was born on 11-28-16 in New Leipzig, North Dakota to Henry & Ameila Dickhaut. Lydia attended grade school in Mott. Lydia met Thomas W. Kallis in Mott & fell in love at an early age & married on Feb. 27, 1944. Once harvest was done in Mott, Tom & Lydia moved to Missoula where they began working & raising their children. Lydia started out working at, what she referred to as “the Christmas trees.” She would help with flocking pine trees & making wreaths. In 1968 Tom & Lydia purchased The Main Spot Restaurant. They worked tirelessly at operating this busy place in downtown Missoula when the boom of the building industry was at its peak. Anyone who lived in Missoula in the early 1970s will recall it was an industrious time for men and women who not only worked hard, but played hard. Lydia was well known for her huge piles of hashbrowns, gravy & large fried steaks after the 2 a.m. bar closing time.

In 1979, Tom & Lydia purchased The Roundup Bar in Greenough. They once again worked their business to a successful operation. Lydia often fed the entire bar crowd & if anyone brought in large catches of fish, she would put on a fish-fry. She sold shots of maraschino cherry juice laced with Everclear for 50 cents & found this to be extra income from the locals.

Lydia was preceded in death by her husband, Thomas, her beloved son, Allen in 2017 and granddaughter Donnette. She is survived by her sons, Henry, David (Mary), daughter, Marcia (Bruce) Wiggins and daughter-in-law, Laurie. She is also preceded in death by all her siblings, Emma, Leonard, Adeline, Elmer and Florence. Lydia leaves behind numerous nieces, nephews, grandchildren and two great-great grandchildren.

Lydia led a good, long life. She worked endlessly at her business adventures. Nobody ever went hungry at Lydia’s home where she would prepare a big roaster of German Strudels for anyone who was looking for a meal. Let us celebrate her life and the blessing we all had for being her family.

A private service will be held. Interment will be at Sunset Memorial. Donations & memorials may be made to Hospice of Missoula who cared for Lydia over the last several months. Heartfelt appreciation is extended to Linda, Cortney & Greg for their care & love toward Lydia & her family. Lydia was lovingly cared for by her granddaughters Julie Price and Michelle Kallis during her last days.


To send flowers to the family of Lydia R Kallis, please visit our Heartfelt Sympathies Store.

We encourage you to share any memorable photos or stories about Lydia. All tributes placed on and purchased through this memorial website will remain on in perpetuity for future generations.

EE
Dear family, I am very sorry for your loss. It is my hope that until now, you have been receiving comfort to help with grieving hearts and minds. Please be assured that here is true comfort to be found in God's Beautiful Words of Promise. The Promise given to Miss Lydia is written at Acts 24:15 . May those Loving and Soothing Words give you hope and ease your grief.
Emily E. - Wednesday November 21, 2018 via Condolence Message
Share This:

Will miss you so much Grandma.
The Wilton's - Tuesday November 20, 2018 via Heartfelt Sympathies
Share This:
1
Page 1 of 1
Share
×