To share your memory on the wall of Marian Nelson, sign in using one of the following options:

Her first love was the accordion. At the age of 10 or 11, her uncle left his accordion with her for a few weeks and by the time he returned, she was hooked. Her parents sold a cow to buy her an accordion of her own and she proceeded to learn every waltz she heard, playing by ear.

Her love for the farming life was not far behind. She had a can-do spirit that helped her time and time again. She managed to get stuck in the mud with the tractor and her father left her there with the tractor while he went to get more help. While he was gone, she removed her clothes, placing a piece as far under each wheel as she could, and drove the tractor out. Wearing her muddy clothes, she hopped back on and was driving the circuit with her tractor when help arrived.

She moved into Ray to attend high school, alternating weeks of school and weeks of working nights as a telephone operator her last couple years of school. She took the job when she was promised she could earn enough money every month to buy a new dress or two. She earned her High School diploma in 1947 from Ray High School. The class motto: Launched--but not anchored.

At a dance on her 18th birthday she met her future husband. He was playing the guitar, and her Uncle Vince was playing the accordion. She married Kenneth Nelson in October of 1948 and their great love and partnership endured until his passing in 2004. Their years together were spent making music, gardening, raising a family, remodeling and building homes and making friends wherever they lived and played. Their son, Ron, was born in Minnesota in December of 1949. After their move to the redwoods of California, their daughter, Coleen, was born in January of 1952, and September of 1954 brought another daughter, Donna. They settled in Missoula in 1964 to complete their family with the birth of their son, Paul in 1966.

For many years, the students at St. Patrick’s School of Nursing called her mother, friend, protector, confidant in her role each night as Housemother, until the school was closed in 1978. She returned to the Montana Forest Service Nursery for seasonal work annually in the fields and greenhouses; harvesting and heating pine cones to extract seeds, planting and weeding, growing, thinning and packaging seedlings bound for reforestation, conservation or sale. She continued this labor of love until her retirement.

She and Ken returned to the farming life they missed on more than one occasion. They had a small dairy operation and raised a few Herefords on their place on the Eel River in northern California. She baked our bread, cooked roast beef, tended garden, changed sprinklers, milked cows, raised chickens, feed the cattle, tended sick cattle and kids, made music, drove the tractor and did temporary work when she had time on her hands. When we were threatened with floods, she moved us to higher ground. She was our Mama Bear. One day our bull made a charge on her in the corral by the barn and she hopped on the fence and gave him a whack on the head with the hammer she carried. Stunned, he spun away from her, ran across the corral, jumped over the gate and kept his distance.

She enjoyed her busy life, catching sleep a few hours at a time. She worked tirelessly, day and night, putting 3 meals a day on the table, keeping us all in clean clothes, making sure her young ones kept up on their schoolwork and were home when the street lights went on (or very soon after). After dinner she might spend a couple hours painting or roofing a house, playing cards, baking and decorating dozens upon dozens of cookies, crocheting or sewing a gift for the newest arrival in the family or jamming with Ken and a few local musicians in preparation for a performance at a dance hall or Senior Center. When accompanying them, she played guitar and piano. When she and Ken purchased a pickup and camper they played in a wider circle, often with friends in the Old Time Fiddler’s Assoc. She knew hundreds of songs by heart, typing the lyrics out for practice or performances. Later she would teach herself to play the electronic keyboard. She could pick up an instrument and music would come out of it.

Marian was preceded in death by her parents, Alvin and Martha; her husband, Kenneth; her brothers, Duane and Harold; her nephews and nieces, Howard, Archie, Karen, Marvin, Billy, and Marilyn.

She is survived by her sisters Evelyn (Kenny) of Tioga, North Dakota and Sharon (Harry) of Champaign, Illinois; sister-in-law Sally of Kalispell, Montana; her children Ron, Coleen (Ed), Donna (Roger), Paul (Kristy); Grandchildren: Chad (Erin), Jessica (Rick), Brandi (Anthony), Niki (Kenny), Maria (Eric) and Miles (Hilary); and Great-grandchildren: Devon, Ellie, Megan, Shannon, Fiona, Jonah, Noah, Hannah, Paige, Avery, Grant, Kara, Colin, and Niels. She had a special place in her heart also for her many nieces and nephews on both sides of the family. She was looking forward to a Nelson family reunion in June of 2020.

Friends who were loved like family, Clerance, Marilyn and Dorothy in Missoula; Donna from high school, and others too numerous to mention, please know that she kept you close in her heart. She met a widower, Rueben Kinzle, at church. Before her passing, she and Rueben enjoyed nearly a decade of fellowship, travel, laughs, Griz football, cribbage and a friendly competition growing tomatoes.

At her request, no funeral will be held. A private graveside service will be held in the spring. Her ashes will be buried next to Ken’s at Sunset Memorial Gardens. In lieu of flowers, a donation to a charity of your choice would be most kind.

Rest in peace, dear mother, your work here is done. You leave us with much love and admiration for a life well lived.
Read Less

To plant a memorial tree in honor of Marian A. Nelson, please visit our Heartfelt Sympathies Store.

There are no events scheduled. You can still show your support by sending flowers directly to the family, or planting a memorial tree in memory of Marian A. Nelson.
Plant a Tree

We encourage you to share your most beloved memories of Marian here, so that the family and other loved ones can always see it. You can upload cherished photographs, or share your favorite stories, and can even comment on those shared by others.

Posted Mar 02, 2020 at 03:10pm
Dear Marian's Family:
I have known Marian since 1996ish. My daughter was about a year and a half at that time, when I started working at Arby's restaurant. She liked to hear my gripes about my kid. lol She would come in, and we would catch up, while I pretended to clean the lobby tables. Then I moved and got married. We lived out of town. We'd often see her at Walmart or the mail. Then fast forward a few years, and I started working in the mall at Hoagieville. Every once in awhile, she would come in, sit at her favorite table, if was available. I would grab a pen and a piece of paper, and sit down take her order. The sandwich would sometimes change. but she always had to have her fries, and a diet coke. While I was at it, she'd hand me the money, I'd ring up the order, take her the change, and Id get her napkins, ketchup and ranch. She liked to be "set-up" before her meal would arrive. Ryan, the GM usually worked lunch, and he's always cut her sandwiches, or add a little something extra. I quit working at Hoagieville in April, of last year. I'm so sorry about her passing. She was pretty spry for her age. I hope she passed peacefully. My dearest sympathies, Jaimie Fisher
Comment Share
Share via: 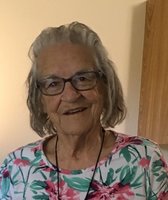