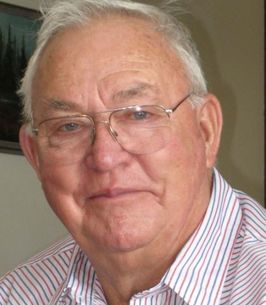 Share this tribute
Memorial Candles Lit for Paul | SEE ALL
Light a Candle
"We are honored to provide this Book of Memories to the family."
— Sunset Cemetery Funeral Home and Crematory
Funeral Details Memory Wall Photos & Videos Send Flowers

Print
Paul Roy Layton left us to join his cherished wife, Peggy, on Nov. 24, 2018. He was born to Roy and Vida Layton on Jan. 29, 1933 in Spokane, Wash. and passed away peacefully at the age of 85 in his home at Grizzly Peak in Missoula.

At an early age Paul’s family moved to Missoula. He attended Franklin School, but did not finish high school. Instead, he enlisted in the Navy in 1952, trained as a pipefitter and served in Korea. Paul was a master of many trades and upon discharge, applied his many skills to his work. He worked on the Rossignol Ranch in Lolo, and as a plumber for 4 G Plumbing. He later became a welder and pipefitter for Montana Power, where he was promoted to Gas Foreman until his retirement in 1983. It was so fortunate for him that he was able to retire at 55, as Paul and Peggy loved retirement life.

He met his lifetime love, Peggy, at his house on 9th Street where Peggy was collecting for her brother’s paper route. Peggy was only 16 years old then, but knew right away how much she loved him. After three years of dating, they were married on September 11, 1953. Their first night of marriage was spent in Polson at the Cherry Hill Motel, then on to Glacier Park. They made their first home together at Naval Base San Diego. Once Paul was discharged, they bought their house in Piltzville, where they spent 59 years, raising two wonderful boys and making lifelong friends. It was always the greatest love affair any two could ever experience. Paul adored her and Peggy adored him. Their hearts were forever joined, and in June, when Peggy passed on, Paul’s world fell apart. He was ready to meet her again to continue their life together, now in a beautiful place called Heaven.

Paul's hands were never idle; he was always busy and his passions were too many to name. He loved being outdoors. He shared this love with his sons and whenever they could, they were fishing, hunting, camping, hiking, boating, riding motorcycles and snowmobiles. He spent many hours customizing his four-wheeler and riding with friends. Another one of his passions was elk hunting in the Bitterroot with his sons, Gary, Paul and the grandkids as well. And … boy, they all have some stories to tell!

Paul was a Craftsman Elite. No job was too hard for him and everything always turned out beautifully because he was a perfectionist! He could do electrical, plumbing, carpentry and make anything he set his mind to do. He was passionate about horseshoe nail art. He made hundreds of pieces of artwork which he proudly gave to family and friends. He also entered some of his artwork in the Missoula Fair and came home with blue and purple ribbons.

Paul was a skilled practical joker, which he learned from his mother. She put a circle of red inner tube in his “bologna” sandwich and try to feed it to him. He passed those skills on to his sons. His nephew Don once said, “It’s never over with those Layton boys!” Paul loved food … especially sweets! (That’s where his boys inherited that from!!) Peggy knew how to make Paul happy – her prize-winning cinnamon rolls were his favorite! Someone recently said if he had to, he would eat them upside down.

Beginning in the 70’s, Paul and Peggy enjoyed spending time at their Nine Pipes cabin. Their “duck shack” started out to be nothing but a desolate looking, small dive, complete with bats and skunks. Paul promised Peggy that he would make it as wonderful as he had made their home. After Paul spent diligent hours, much hard work and added special touches, it turned into a beautiful cabin, of which Peggy was very proud. They spent many weekends with friends and family at the cabin. It was also when they were able to retire, their sons got married and their pride and joy came along … grandkids! They loved being with Ty, Justin, Amanda, Trent and Daniel. Many fond memories were made at Nine Pipes each summer with them. They looked forward to spoiling all five grandkids with fun times boating and tubing at Flathead. Papa always made sure when he was up, everyone was up. They also took all five to the Missoula County Fair for fun rides at the carnival. (Whew!!)

Retirement allowed Paul to become very involved in his community and he was so proud of helping to save the Big Black Bridge in Bonner. He also joined the Parkinson’s support group, became state chairman and helped to start other groups. But, their priority in their later years was supporting their grandkids. They also became actively involved in Hope Baptist Church in Bonner. They lived, loved and breathed everything that church provided for them. They became involved in Bible studies, services and just plain good times and good fellowship. Worshipping our Lord and Savior with their Christian family in Bonner brought them peace and satisfaction.

Wherever you saw Paul, you could be sure to know Peggy was within a stone’s throw away. They were inseparable. She just wanted to be close at his side. He was her “Rock” and “Best Friend” in life. They moved into the Grizzly Peak in 2014 so they stay together. They made many friends there and were able to reminisce and relax. As their health began to fail, they were assisted by Liz and her group. Paul appreciated this team so much. Our love and appreciation go out to each and every one of them. The family also thanks the incredible staff at Grizzly Peak and Consumer Direct Hospice.

In lieu of flowers, the family requests memorials be made to Hope Baptist Church, PO Box 755, Milltown, MT 59851 or a charity of choice.

We encourage you to share any memorable photos or stories about Paul. All tributes placed on and purchased through this memorial website will remain on in perpetuity for future generations.

LD
Please accept my heartfelt condolences. While no words can erase the pain of your loss at this time, you can look forward to the promise at Revelation 21:4 – “God will wipe out every tear from their eyes, and death will be no more, neither will mourning, nor pain be anymore. The former things have passed away.” Death and pain was not God's purpose for us. However, when this promise is fulfilled, we will enjoy life the way our Grand Creator purposed for us…forever on earth. (Psalms 37:11, 29)
Lisa D. - Thursday December 06, 2018 via Condolence Message
Share This:
1
Page 1 of 1
Share
×