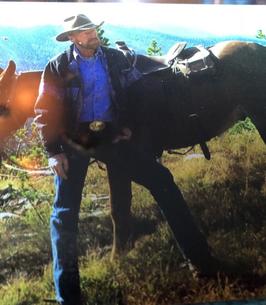 Share this tribute
Memorial Candles Lit for Raymond | SEE ALL
Light a Candle
"We are honored to provide this Book of Memories to the family."
— Sunset Cemetery Funeral Home and Crematory
Funeral Details Memory Wall Photos & Videos Send Flowers

Print
Raymond L. Brayton, 68, of Huson, passed away at his home Oct. 9, 2018. He was born on March 11, 1950, in Columbus to Billie and Gail Brayton. He was the 3rd in the family of four children. The family eventually moved to Missoula. Ray attended and graduated from Willard school. Ray served in the Army in Vietnam from 1969 to 1970 with an honorable discharge.

Ray’s career started at T&W Chevrolet as a mechanic where he met his future wife Pam. Ray just celebrated their 33rd anniversary.

In 1986 Ray started working at Missoula County Airport Authority as a heavy equipment mechanic until retirement.

Ray is preceded in death by his parents Bill and Gail and sister Bernice. Ray is survived by his wife Pam, sons Travis (Julie), Mike (Amanda), sister Janice, brother Edward, granddaughters Brooklyn, Michelle, Taylor, Tara, great-granddaughters, Allura and Thea, as well as many nieces and nephews, and his beloved dog Mya.

Many thanks to Partners in Home Care, especially Joe, for their special care. Services will be held Oct. 12 at 11 a.m. at Sunset Memorial, Mullan Road.

To send flowers to the family of Raymond L Brayton, please visit our Heartfelt Sympathies Store.

We encourage you to share any memorable photos or stories about Raymond. All tributes placed on and purchased through this memorial website will remain on in perpetuity for future generations.

GE
We talked about Ray at work routinely after he retired, stories abound. We'll continue to speak fondly of Ray going forward from here. He'll live on in our memories.
GEORGE ERICKSON - Friday October 12, 2018 via Condolence Message
Share This:

TD
My Marlboro Man, from the time I was old enough to touch a horse, Ray was there. My dad hated horses Ray loved them so between Ray and my grandma I still love them. I will never forget bringing the horses from Paulsen's in Kalispell at night, and Ray taking on Candy Man.
I am so sorry Pam, Travis and Mike for your loss, I loved you dad, He was my hero. Who will argue with my dad now?
Tricia (Doty) Dally - Thursday October 11, 2018 via Condolence Message
Share This:

JJ
I had the privilege of working with Ray for about 8 years and knowing him for 9. He was always good for a laugh and to give me a hard time. I will definitely miss Ray. He was a good egg!!
Jesse Johnson - Thursday October 11, 2018 via Condolence Message
Share This:

DK
Ray was quite the character and will be missed! He was funny and cranky and sarcastic but had a great smile and always made me laugh. Yep, he will be missed....
Dave and Barb Kreis - Thursday October 11, 2018 via Condolence Message
Share This:

JD
I can see you dancing with mules in the sky, laughing with that unmistakable mischievous grin. God speed Ray. Thank you for caring so much for my children, you will always be Uncle Ray to Libby and Joe. I will forever be grateful for your kindness, your friendship and your tricks. We will miss you, the beautiful memories of the times we spent in the hills, or just sitting around chatting will remain close to our hearts.
Jeri Delys - Thursday October 11, 2018 via Condolence Message
Share This:
1
Page 1 of 1
Share
×