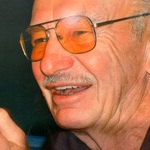 ROGER HETRICK
Roger S. Hetrick departed this life on October 2, 2019. He was born November 1 , 1929 in Glasgow, Montana to parents John ("Stan") Hetrick and Gertrude (Schultz) Hetrick. He was raised with his sister Betty (Martinsen) in Saco, Montana in the Milk River area. He graduated from Saco High School in 1947.
Roger married Helen ("Nel") Murdock in 1950, and served in the Army's 82nd Airborne in Fort Bragg, North Carolina from 1952-1954. Upon returning to Montana, Roger managed a ranch with a large cattle herd outside of Cut Bank for a couple of years, putting many miles on his horse, before he and Nel moved to Glasgow. They later divorced. Roger moved to California where he married Edith "Ede" Wratislaw. He worked for Plant Maintenance in Martinez, California for 25 years and retired in January 1990 as Vice President/General Manager. After retirement, he got his real estate license and also developed a passion for golf.
After Ede's death in 1999, Roger met Bee Bedwell in 2000 and they have been together since then. Roger is survived by: Bee Bedwell, Albert "Fred" Wratislaw (Mary), Vicki Braden/Nelson, Steve A. Wratislaw (Vicki), and Kirk M. Hetrick; grandchildren Nathan Wratislaw, Natisha Powell (Clint), Heather Wratislaw, Brent Braden (Katherine), Kaysi Braden, Brooke Wratislaw, and Matt Wratislaw; great-grandchildren Carlie and Amanda Powell, Lily Vladimir Wratislaw, Cody Wratislaw; Michael, Alexia and Anthony Braden; Vanessa, Jocelyn and Edith Wratislaw. Roger will be missed for his love of family and friends, his wisdom and his humor.
A memorial service will be held at Sunset Memorial Gardens on Friday, October 25, in Missoula, Montana at 10:00 AM with burial to follow.
In lieu of flowers, memorial donations can be sent to the Alzheimer’s Foundation of America 322 Eighth Ave. 7th Floor, New York, New York 10001 , or to a non-profit of your choice.